BBC Radio 4 has just produced an excellent series about the social effect of telecommunications. Hidden Histories of the Information Age, presented by Aleks Krotoski, was broadcast in the week that the Science Museum in London opened its new information age gallery, and all five of Aleks’s programmes — each just 14 minutes’ long — tie in with sections of the gallery.

All five programmes are available as mp3 podcasts, which you can download to your smartphone, computer or mp3 player. The main page is here: http://www.bbc.co.uk/podcasts/series/infoage

The campaign to save Enderby House has taken a new stage with the formal setting up of the Enderby Group, a team of south-east Londoners who are campaigning to preserve the site where the international telecommunications revolution began in the 1850s.

After a series of meetings called from early 2014 by industrial historian — and former local councillor — Dr Mary Mills, on 28 September Dan Hayton of the Greater London Industrial Archaeology Society and the Newcomen Society chaired a meeting in Greenwich that formally set up the Enderby Group, appointing officers and starting work on a business plan that aims to see the survival of the house.

The group is already in touch with the Porthcurno museum in Cornwall, where many of Enderby’s cables came ashore, and with other interested parties.

Why Enderby House is important

Enderby House, on the Greenwich riverside just north of the old Royal Naval College, became crucial to the history of the world’s communications after the Atlantic Telegraph Company was set up in 1856 to provide a telegraph link between the UK and North America.

Originally called Telcon — for Telegraph Construction and Maintenance, created in a merger between Glass, Elliot and Company and the Gutta Percha Company — this is the oldest continuously operating telecommunications factory in the world. In its first 100 years the Enderby Wharf factory made 82% of the world’s subsea cables, 713,000 kilometres of cable. During the Second World War Telcon used the factory to build Pluto, the ‘pipeline under the ocean’ that delivered fuel to Normandy after D-Day in 1944.

Several years ago Alcatel-Lucent, the current owner, sold the riverside part of its site, including the grade-two-listed Enderby House, to Barratt, the house development company. Alcatel-Lucent continues world-leading work on telecommunications technology on the rest of the site, while Barratt is well advanced with building houses and flats.

Barratt is required to keep Enderby House — badly deteriorated in condition but partly protected by a fence — but the company has not yet found a function for it. That is why locals have set up the Enderby Group, to find a secure long-term use that honours and recognises its role in the telecommunications revolution.

The wharf is named after Samuel Enderby, who had an oil and chandlery business in the area and bought an existing ropewalk on a former gunpowder test site to develop a factory to make canvas and rope. Enderby House was built on the riverside in the early 1840s. Woolwich-born General Charles Gordon is believed to have spent his last night in Britain at Enderby House before leaving for Sudan, where he met his end.

The whole area around Enderby Wharf — and on the other side of the river — has had a long connection with telecommunications, running through to recent times.

A century after TCM made the first cables, a young Chinese student called Charles Kao came to Woolwich Polytechnic — now transformed into the University of Greenwich — to study for his first degree, in electronic engineering. By then TCM had become part of the giant Standard Telephone and Cables group, and Kao went on to work there — where in the 1960s he came up with the idea that fibres of glass could carry information in the form of laser light. In 2009 Sir Charles Kao, as he now is, won the Nobel Prize for Physics for his work.

Part of the cable for the first, unsuccessful attempt to build a transatlantic cable was made by Glass, Elliot at Morden Wharf, just downriver from Enderby Wharf. In 1862 Glass, Elliot used the Enderby Wharf factory to build a better protected — and successful — cable. The ship used to lay it across the Atlantic was Isambard Kingdom Brunel’s SS Great Eastern, built on the Isle of Dogs just across the river.

From then until the 1970s the Enderby factory continued to make subsea telecoms cable, which was loaded onto cable-laying ships via gear that still survives on the riverside — though the ownership of that is still unclear. The Enderby Group wants to preserve the cable-laying gear and Enderby House as the birthplace of the international communications revolution.

Please get in touch if you’d like to help.

Contact the local councillors for the Peninsula Ward of the Royal Borough of Greenwich: Steve Brain, Denise Scott-McDonald and Chris Lloyd, at the Town Hall, Wellington Street, London SE18 6PW. A list of all Greenwich councillors can be found here

Barratt, the developer of the site, has appointed a communications consultancy, Hard Hat, to work with the local community. Joshua Lindsey is  the account executive working on the project. You can email him at jlindsey@hardhat.co.uk 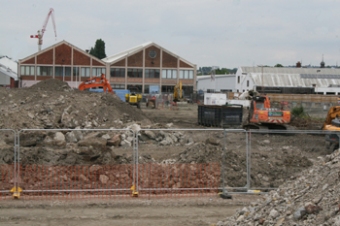 Hard Hat, the communications/PR consultants working for Barratt on the Enderby Wharf site, is holding a meeting on the development proposals in Greenwich on Wednesday 25 June at 18.00.

Barratt is already demolishing the existing property on the site – part of Alcatel-Lucent’s historic cable factory, where most of the world’s undersea telegraph and telephone cables were made from the 1850s to the 1970s. You can see the demolition site in the picture above, taken in May 2014. Alcatel-Lucent’s remaining buildings are in the distance.

The meeting is at the Sherard Hall at the Forum @ Greenwich, which is in Trafalgar Rd, London SE10 9EQ (click here to see on Google Maps).

Hard Hat is holding the meeting at 6pm because its previous meeting – on 27 March – was in the afternoon, too early for many people. Let’s hope Southeastern Railway is having a good day and people can get there on time. Nearest station: Maze Hill.

Anyway, put it in your diary. We’ll be reporting on the meeting here on www.enderby.org.uk

If you plan to attend, please let Joshua Lindsay of Hard Hat know on jlindsey@hardhat.co.uk or 020 7636 6603 — at least so that they can put out enough chairs.

Barratt’s site about the proposed development at Enderby Wharf is here.

It was where the world’s first telegraph cables were made in the 1850s, pioneering technologies that for the first time allowed people to send and receive messages in minutes rather than days or weeks.

The people who worked at Enderby Wharf have had a leading role in building the technologies that connected the world — from the 19th century telegraph networks to the international phone networks of the 1970s to the internet today.

We hope you agree and will want to help us work to secure the future of Enderby House and the cable-loading gear on the river bank. If you’d like to get in touch with us, click on “about” for names, email addresses and phone numbers

If you’re interested in finding out more about the contribution Greenwich made to the communications revolution, here are some more sources of information: 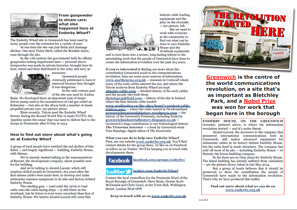 We have a handy leaflet setting out the history of Enderby Wharf and our case for preserving it. It can be downloaded as a PDF from here. Please feel free to print it out and distribute it.

Other sources of information

www.porthcurno.org.uk — museum in Cornwall where many of the early cables entered the sea, and where the Telcon archives from Enderby Wharf are kept

atlantic-cable.com — detailed history of the early cables and the people who built them

thetelegraphfield.com — history of the site in Ireland where the first Atlantic cable landed

www.seethesites.ca/the-sites/heart’s-content-cable-station.aspx — where the cable landed in Newfoundland

greenwichpeninsulahistory.wordpress.com — the history of the Greenwich Peninsula, including Enderby

Greenwich Marsh – the 300 years before the Dome  — fascinating account of the industries that were in the area, not just Telcon but also Mowlem and Bessemer as well as makers of penny-farthing bicycles, steam cars and guns. Written in 1999 by Dr Mary Mills. The book is hard to get hold of but is occasionally available on Abe Books

The Victorian Internet — a book by Greenwich-born Tom Standage, digital editor of The Economist, which explains the importance of the international telegraph to the 19th century communications revolution. You can buy it from Amazon here

The Atlantic Telegraph — a complete account of the work to link Europe and America, by William Howard Russell and first published in 1866. It was reprinted by Nonsuch Publishing in 2005 and copies are available via Amazon

The Telcon Story by GL Lawford and LR Nicholson  —  published by Telcon, the Telegraph Construction and Maintenance Company, in 1950 to celebrate its 100th anniversary. Copies are available on Amazon from a few pounds (but be careful  — some sellers ask for several hundred pounds)

There’s a basic history of Enderby Wharf on Wikipedia here

Alcatel-Lucent publishes its history here, but you need to scroll down to 1993 to find its acquisition of what was then Standard Telephones & Cables

Grace’s Guide, a site about British industrial history, has information about Telcon, as well as its predecessors, Glass, Elliot and Gutta Percha Co, and its successor companies, Submarine Cables Ltd and then STC. Grace’s Guide brings together indexed contents from a number of sources from 1820 onwards, including pages of two leading magazines, The Engineer and Engineering 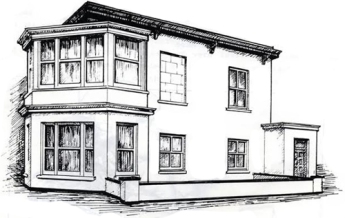 A group of local people have watched the sad decline of this listed — and hugely significant — building, Enderby House, with dismay. We’ve already started talking to the representatives of Barratt, the development company, about possible uses for the building.

And we’re talking to Alcatel-Lucent, which still employs skilled people in Greenwich, 164 years after the first subsea cables were made here, to develop and make submarine repeater equipment in its labs and factory behind Enderby House.

The winding gear — used until the 1970s to load cable onto the cable-laying ships — is still there on the riverbank, but its future is even more uncertain than that of Enderby House. We believe Alcatel-Lucent still owns this historic cable loading equipment and the jetty on the riverside — see picture, left.

But we want to work with everyone in the community to find out what can be done to save Enderby House and the riverbank equipment and to turn them into a secure, long-lasting tribute to the astonishing work that the people of Greenwich have done to create the information revolution over the past 164 years.

ENDERBY HOUSE, ON THE GREENWICH riverside, is where the information revolution started — and it’s under threat.

Alcatel-Lucent, the successor to the company that pioneered international communications here in Greenwich, still makes advanced equipment for submarine cables in its factory behind Enderby House, but the cable itself is made elsewhere. The company has sold off most of its site — including Enderby House — to Barratt, the house-building company.

So far there are no clear plans for Enderby House. The listed building has already suffered from vandalism — see the picture above, taken in late May 2014. But a group of locals believes that it should be preserved to show the contribution the people of Greenwich have made to the information revolution. That’s why we have produced this leaflet.

This website is here to tell you all about it.